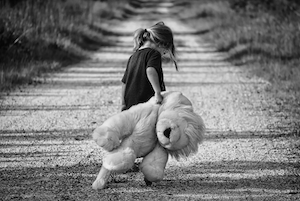 Physical child abuse is the second most reported form of child abuse in the United States. It accounts for a quarter of all child abuse cases and can potentially result in a serious injury or death of a child. [Source]

Physical or violent child abuse is a physical injury that is inflicted upon a child with the intent to be cruel or damaging. Physical abuse can be the result of a variety of violent acts, such as punching, beating, burning, shaking, or harming a child in any other physical way. Sometimes allegations of physical child abuse occurs by accident in a scenario in which a caretaker accidentally punished a child too harshly, resulting in an injury.

Here, we will be reviewing a 2013 research study where the authors explored the relationship between bruising and physical child abuse. In particular, the idea that certain patterns of bruising can suggest or diagnose physical child abuse was tested. The methodology used involved a multi-language literature search across thirteen databases using over sixty keywords. In order to ensure quality standards, a novel confirmation of the abuse scale was used. Updates involved expanded keywords and a more intensive and high-standard abuse confirmation technique. The paper is: Sabine Maguire and Mala Mann. Systematic reviews of bruising in relation to child abuse — what have we learnt: an overview of review updates. Evid.-Based Child Health 9: 255-263 (2013).

“Of 1495 potential studies, only three met the inclusion criteria for the ageing of bruises in 2004, confirming that it is inaccurate to do so with the naked eye,” the results of the research study read. “This was roundly rejected when first reported, generating a wave of new studies attempting to determine a scientifically valid method to age bruises, none of which are applicable in children yet. Regarding patterns of bruising that may be suggestive or diagnostic of abuse, we included 23 of 167 studies reviewed in 2004, although only 2 were comparative studies. Included studies noted that unintentional bruises occur predominantly on the front of the body, over bony prominences and their presence is directly correlated to the child’s level of independent mobility. Bruising patterns in abused children differed in location (most common site being face, neck, ear, head, trunk, buttocks, arms), and tended to be larger. Updates have included a further 14 studies, including bruising in disabled children, defining distinguishing patterns in severely injured abused and non-abused children, and the importance of petechiae.”

Petechiae are red or purple tiny pin-point spots that can appear anywhere on the body and represent bleeding under the skin. While petechiae have a few non-violent causes (such as endocarditis, sunburn, leukemia, sepsis, strep throat, infections, penicillin, aspirin, and other medications) they can indeed be caused by blunt force trauma. Skin damage caused by biting, kicking, or hitting can cause these small dots to appear. Petechiae can be caused by direct acute impact pressure or even suction (such as hickies). They can also be caused by indirect forces, such as coughing, vomiting, convulsions, asthma, sneezing, etc.

Doctors use a rule of TEN, which is an acronym that stands for torso, ear and heck. These are the areas of the body where one commonly sees bruises that raise a suspicion of abuse on children under four years old.

Some bruising sites are indicative of defensive postures of the child, “where the children had wrapped their arms around their flexed legs in an attempt to protect themselves, thus sustaining bruises to the upper arms or outer thigh.”

When a child has bruising interspersed with skin abrasions, that may indicate that a rope was used to discipline the child.

One specific form of injury associated with child abuse allegations is what’s referred to as “scalping,” where a swelling occurs over the forehead or eyes. Doctors postulate that children with this injury “may have been swung by their hair.” On the other hand, “[a] similar injury has, however, been noted in Afro-Caribbean children who have their hair braided, and where excessive force has been used in combing the child’s hair back.”

The systematic review of bruising concluded that there is “no evidence to support the common practice of clinicians estimating the age of a bruise from its appearance, and most specifically its colour.”